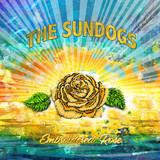 Brothers Lee and Will Haraway formed The Sundogs in Atlanta, GA in the early 2000s and quickly earned attention for the melodic Americana Rock and Roll sound of their records and especially for their high-energy live shows. The Sundogs released “BB Gun Days” in 2004, “Instrument of Change” in 2007 and “Cut & Run” in 2015, which was the first release from The Sundogs to also feature songs from co- lead guitarist Jon Harris, former leader of Jon Harris and the Sin Hounds. Having long been compared to Tom Petty & the Heartbreakers, the band started performing The Sundogs Present ‘The Tom Petty Show’ in 2008 and have played a complete Petty tribute every December thereafter. The six-piece lineup also includes renowned Atlanta gunslinger Benji Shanks, ace Hammond keyboardist Kevin Thomas and drummer Jeff Mills. In May 2021, The Sundogs will release their 4th (5th if you count The Haraway Brothers, which you should) official record, “Embroidered Rose”, produced by Jeff Mills and Kevin Thomas at Mills’ 360 Studios in John’s Creek, Ga. featuring nine new songs written by both Haraways and Harris, with essential contributions from Thomas and Shanks, as well as Mills on drums, percussion and arrangements. It's the record they’ve always wanted to make, honestly. Achingly beautiful melodies and stories that alternate between tragic, hilarious and throw-your-fist-in-the-air badassery. This is America’s Band.