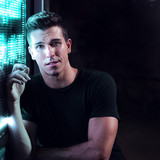 Daniel Assetta is one of Australia’s leading theatre performers. He has carved a very diverse and successful career throughout the years, performing in some the biggest international musicals including The Book of Mormon, Wicked, CATS, Funny Girl, Follies and Curtains. Daniel won the prestigious Rob Guest Endowment Award in 2015, after winning The Playbill Future Prospect Award the previous year, which gave him the opportunity to perform in New York amongst Broadway stars in the renowned Elsie Fest, and in the Michael Mott & Friends concert. He is currently appearing in Australian/International tour of WEST SIDE STORY alternating in the role of 'Tony' as well as starring in sold out season of the new cabaret, SIBLINGSHIP, alongside his sister Chiara at the Hayes Theatre Co in October.