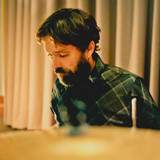 Greg J Walker is an Australian composer, multi-instrumentalist, songwriter and producer based in Victoria’s lush South Gippsland, just outside of Melbourne. Most recently known for his music on the