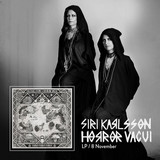 Siri Karlsson is a Swedish duo that embodies the tales and mysticism of Scandinavia with contemporary sounds. If you could imagine the mountains sing and the woods speak, it would probably sound similar to the experimental musical universe of Siri Karlsson. With vocals, alto saxophone, key fiddles and keyboards they create an unorthodox and highly personal hybrid of folk, drone and psychedelia. In cooperation with one of Sweden’s top producers, Jari Haapalainen, Siri Karlsson has revolutionized the conception of contemporary Swedish folk. The

duo is multi awarded and active as film score composers. Siri Karlsson consists of Maria Arnqvist on saxophone, keyboards/synthesizers and voice, and Cecilia Österholm on key fiddles and voice. Cecilia has reinvented the key fiddle through sculpting a unique sound, playing with and promoted by Benny Andersson from ABBA on the Swedish folk scene. Maria, on saxophone and synthesizers is active on the Swedish avant garde and psych scene. Siri Karlsson has long list of collaborations with exceptional musicians from the Swedish music scene in jazz, folk prog/psychedelia.