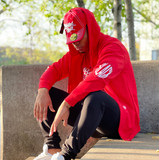 Jessie Is an Black American Artist and Songwriter from Milwaukee WI. Best Known as JessieTheGoat or JMoney. He started his rap career through the art of poetry at an early age. In the third grade writing poems and raps became a hobby in which he used to perform and school black history programs. Jessie began to write raps not only about black history but about his upbringing lifestyle, the struggle, the poverty the turmoil, things that he went through while growing up and what most seem to relate too. His style is melodic, lyrical, catchy and has new wave to it and it seems to catch a lot of different listeners. sound-clouds hits like "Take Off" was a outlook to continue his love for music.   JMoney Grew up in a single family house-hold with his brothers and sisters. Watching his mother struggle day and night to maybe make ends meet was tough being the youngest in the family of six. Some of his musical idols that he grew up listening to were, Lil Wayne and J Cole. Jessie Development for music writing was most influence by Lil wayne and J Cole metaphors   With his first single release "Snakes" In 2019 Jessie manage to sweep through his city locally. With a follow up album "Doin' Too Much" and remix to "DTM with the famous artist and writer ISH DARR and Sharrod Sloans. His style of rap has some thinking he could be a big asset to the music industry. With still being new to music game Jessie seems to be dropping hit after hit and has fans thinking he could be NEXT UP.