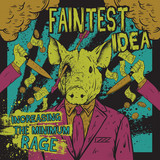 Faintest Idea take the bouncing beat of 2 Tone Ska and smash it over the head with fast, angry UK Punk. Hailing from the East Anglian region of Britain the rabble rousing political lyrics are shouted over layers of catchy brass lines and heavy boot stomping beats. Signed to TNSrecords the band have extensively toured the UK, Europe, Russia, Canada and Japan and had major airplay on BBC Radio 1's Punk Show with Mike Davies, being invited down to the legendary Maida Vale Studios in London to record a live session . Playing anywhere and everywhere from squats to bars to festival main stages and drawing inspiration from bands such as The Specials, The Filaments & Operation Ivy this is angry political commentary that you can shout along to while stomping your feet.