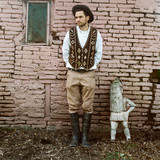 Argentinian producer Pedro Canale has been working on Chancha Vía Circuito, a musical project that has allowed him to travel the world and put his mark on what is now known as latinamerican electronic music, since 2005. He began by exploring digital cumbia, but as he journeyed through Latin America, he experimented with acoustic sounds. His catchy sound transformed him into a notable reference for a new generation of artists. All 5 studio albums, the remixes, and Eps from Chancha Vía Circuito are edited in Argentina, the U.S., Europe, and Japan with labels such as ZZK Records, Wonderhweel and Crammed Discs. Their international reach has expanded further than any latinamerican territory and can nowadays be heard playing at the top festivals in Europe and the U.S. – such as MUTEK, Roskilde, and Vive Latino. The general public will recognize Chancha’s sound thanks to one of their hit remixes, “Quimey Neuquén,” which was selected to be part of the Breaking Bad soundtrack in 2013. Pedro Canale is sharing with you a new EP with the singer/songwriter Luvi Torres October 15 of 2021.