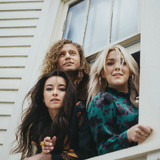 The Wandering Hearts shot to the forefront of the UK folk-Americana scene with their debut album ‘Wild Silence’. Earning glowing comparisons ranging from First Aid Kit to Fleetwood Mac, the album propelled them upon a remarkable journey during which they played some of America’s most storied venues. After a personal invitation from the legendary Marty Stuart, they became the first band to make their US debut at Nashville’s iconic Ryman Auditorium and then play the Grand Ole Opry in the same week. An early highlight came at the UK Americana Awards, where they won the Bob Harris Emerging Artist Award and performed with Robert Plant, Mumford & Sons and Imelda May. Two years on the road followed, with sold-out headline tours, support slots for Lukas Nelson, Justin Townes Earle and Larkin Poe, opening for Tom Petty and Stevie Nicks at London's BST Hyde Park, and festival circuits across the UK and US. The Wandering Hearts headed to the idyllic setting of Woodstock, NY at the start of 2020 to record their follow-up self-titled album with producers Simone Felice and David Baron. Previewed by the singles On Our Way, Dolores, Gold and Over Your Body,

the eagerly awaited album is out now.