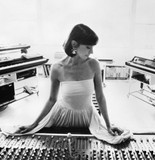 Suzanne is a five-time Grammy award nominated composer, electronic music pioneer, and neo-classical recording artist whose work has been featured in countless commercials, video games, and feature films. Over the course of her 40+ year career, she's released 16 solo albums. She's been recognized as Keyboard Magazine's "New Age Keyboardist of the Year," provided the voice and sounds for Bally's groundbreaking "Xenon" pinball machine, created Coca-Cola’s pop-and-pour sound, designed Atari’s sound logo, played concerts all over the globe, and carved out a niche as one of the most creatively successful female composers in the world. A Life in Waves, a documentary about Ciani’s life and work, debuted at SXSW and is available to watch on all digital platforms.   Her latest release “LIVE Quadraphonic” is a recording of her first solo Buchla synthesizer performance in 40 years, beginning a string of exclusively quadraphonic performances around the world. This performance like every other since that day have been in the long forgotten Quadraphonic format; the earliest true 360° listening format of which the original Buchla 200 synthesizer natively output via the Buchla 227 quad output module. Since that performance, a global array of sonic experts have worked together to rebirth this first Quadraphonic vinyl LP in 30 years. Current owners of vintage Regular Matrix quadraphonic & Dolby Pro Logic II receivers can listen to LIVE Quadraphonic in quad directly from Spotify.