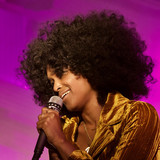 The last 2 years has been a fantastic ride for Iris Gold, with more than 150 concerts at festivals and venues across Europe with rave reviews for her energetic and powerful soul / pop performances.   She earned a nominated at the Danish Grammy

Award as “ best new live artist”   2019 also was the year she released her critically acclaimed debut-album "Planet Cool". The Guardian gave the album **** Stars. The release was followed by an European Festival tour with 33 shows spread across, Scandinavia, France, UK, Holland, Estonia, Lithuania, Germany, Schwitzerland Romania and more..   In August she stepped on stage with Nile Rodgers & Dave Stewart at a sold out Royal festival Hall in London to celebrate Eurythmics.   “Fantastic, infectious, and joyous” – Clash Magazine “Singer-songwriter and wordsmith Iris Gold had one hell of a musical start, (...) getting the likes of Taylor Swift, Robbie Williams and Blur among others.” – Fritz.de