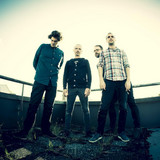 The Samuel Jackson Five is a adventurous instrumental post rock quartet. Their sound is influenced by post rock veterans

Tortoise , Do Make Say Think and Mogwai, prog icons King Crimson, Yes, and draws elements from dark jazz, improv, krautrock and pastoral folk. SJ5 have released five albums since their genesis in 2001, including what many argued to be THE instrumental album of the year, Easily Misunderstood (2005). After a 4 year hiatus, during which they released a indierock album under the name Ghost Karaoke in 2017, the band has started working on a new album. The Samuel Jackson Five are: Sven Andréen: drums/electronics Sigmund Bade: bass/keys Thomas Kaldhol: guitar/bass Thomas Meidell: guitar/keys/electronics