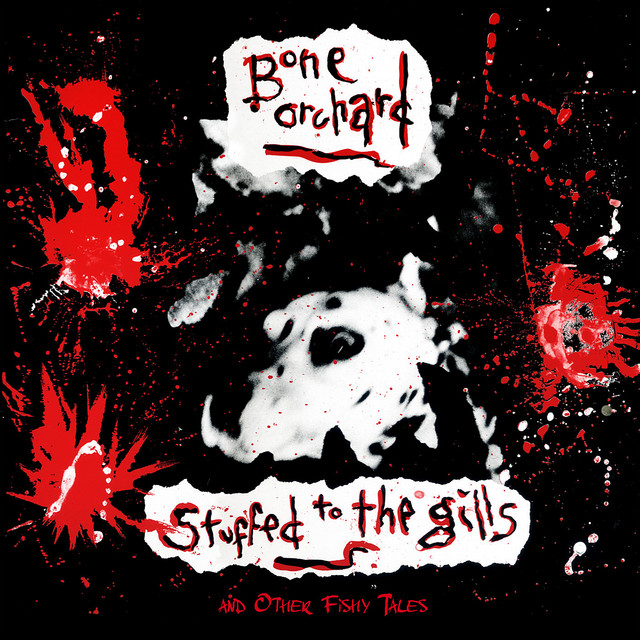 One of the lesser lights of the UK’s early 80s gothic punk scene, Brighton, Sussex band Bone Orchard were otherwise largely typical of the genre - proffering brooding rock tunes peppered with moribund lyrics and a craven anti-glamour image. They were led by singer Chrissie McGee, backed by Troy Tyro (guitar), Paul Henrickson (bass), Mike Finch (drums; later replaced by ‘Tim’, one of five drummers during the band’s lifetime) and Mark Horse (guitar). As well as two albums and a handful of singles, Bone Orchard were one of the few of their genre favoured by airplay from BBC disc jockey John Peel. Song titles aired on their July 1983 session for the programme, such as ‘Shall I Carry The Budgie Woman?’, at least suggested a degree of imagination outside the usual gothic vocabulary of ghouls and graveyards. Earlier they had performed their first gig in London in April, before the five-track Stuffed To The Gills appeared on Jungle Records in the autumn. This was followed by an appearance at the 1983 Futurama Festival, by which time they were already trying to distance themselves from the gothic movement. Their name, if not always their style of music, which included chugging rhythmic passages and a nod towards high velocity rockabilly, did not help in altering the perception. The release of Jack confirmed a certain musical ability, but they evaporated with the passing of the gothic scene’s popularity.