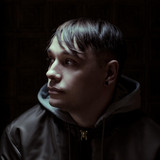 Watermark High is the alias of Boston-based South African electronic musician/producer, Paul van der Walt. Watermark High’s sound typically evolves around the marriage of acoustic & electronic instruments, beats, field recordings & loops, to create evocative electronic sound collages. Since the project's inception in 2012, Watermark High has released numerous EPs, an album and a series of singles. He performed live at most of South Africa's leading electronic music festivals including the Cape Town Electronic Music Festival and Oppikoppi, as well as numerous clubs throughout the country. His music has been heard in various advertising for brands like Microsoft, adidas, Absolut Vodka, Samsung, Fila, Cadillac, New Balance, Google Plus and more. "What stands out the most about Paul's music is the drama of his melodies and progressions. Each of his songs is an emotively pendulous odyssey owing to his mastery of the art of momentum. This mastery is apparent in the arrangements of his songs as well as in the narratives of the projects they belong to" - Red Bull Music