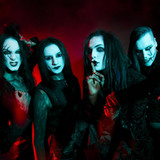 MISTER MISERY, is a modern, alternative metal band from Sweden, blending clean/gritty vocals along with high energy riffs and anthemic choruses. Their sound borders the genres of both old school rock n roll, sleaze and aggressive metal, all mixed perfectly together to create the unique sound that characterises MISTER MISERY today. After the pace-setting release of their praised debut album “Unalive” in 2019, the band has not slowed down, despite the fact a global pandemic crushed schedules, MISTER MISERY kept busy during quarantine, writing new breathtaking material, while still releasing numerous compilations for their fans in the meantime. MISTER MISERY just launched their pre-order for their second full length album “A BRIGHTER SIDE OF DEATH”, set to be released on April 23rd, 2021. The first single of the album: “BALLAD OF THE HEADLESS HORSEMAN” combined with a mind-blowing music video was released on December 11th. The single marked a milestone for the band and opened up the next chapter of their horror story! Stronger, scarier and more diverse than ever. Their second single “DEVIL IN ME” was released the 26th of February, 2021, combined with the bands most ambitious music video to this day! “A BRIGHTER SIDE OF DEATH” will pave the way for the next era of MISTER MISERY. MISTER MISERY are: Harley Vendetta - Vocals/Guitar Alex Nine - Lead Guitar/Backup Vocals Rizzy - Drums/Backup Vocals Alex Alister - Bass/Backup Vocals