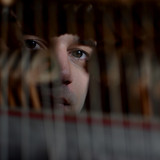 André Barros is a Portuguese-born composer and self-taught pianist with an exceptional capacity for hard work. Mostly focusing on the genres of contemporary/modern classical and electronic music, he has been composing original scores since 2013, one year after he concluded his three months’ internship as a sound engineer at the Sigur Rós’ founded studio, in Iceland. In 2015, he was awarded his first "Best Score" prize, at the Los Angeles Independent Film Festival Awards for his work in Linda Palmer's short-film "Our Father”, featuring Michael Gross (Family Ties, Tremors). Since then, André has been awarded with another dozen “best score” awards for four different film projects. Most recently, in 2019, André also won the award for best music used on film/tv/game at the 17th edition of the Independent Music Awards in New York City for the title theme he composed for the stunning 3D silent independent feature film entitled "LEDA" (a film reimagining the Greek myth "Leda and the Swan" by young director Samuel Tressler IV). With now close to thirty film credits and musical collaborations that range from Iceland to Sri Lanka, André has also released five studio albums so far. He also frequently composes music specifically for tv/web commercials for international brands, such as Volvo, LG, Stihl, Renault, Craft or Polestar. Know more about his work at: www.andrebarrosmusic.com