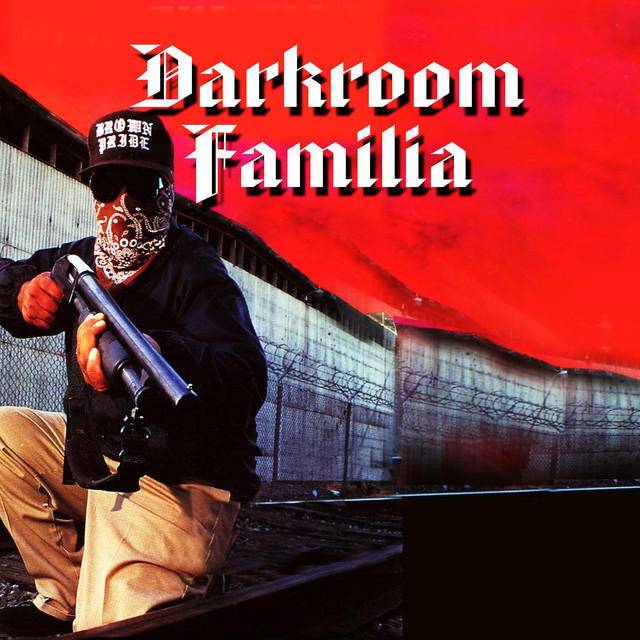 Darkroom Familia is a rap group with artists from various parts of Northern California originally formed by Duke (Hayward), Crooked (Hayward), Dee-Roll (Oakland) and Sir Dyno (Tracy). In 1988, they were the first Latino rappers from Northern Cali, paving the way for many rap artists by bringing them into the crew or offering them feature spots on their many releases. Touring throughout the 90s at Lowrider shows and concerts across the nation, they quickly gained a massive fan base. After world-wide releases of over 120 albums and 20+ feature films starring their rappers, Darkroom Studios became one of rap's most prolific labels with the infamous Darkroom Familia leading the pack. They released the first all Spanish rap album Los Traficantes De Darkroom Familia predating a Cypress Hill release by 8 months. In 1998, they released the first film from Northern Cali/The Bay Area: Penitentiary Chances. The sequel Veteranos, starring Jesse Borrego (Blood In Blood Out) has acquired a cult status among its Latino fan base. They followed-up a year later with one of the classics in the Latino gangsta genre; Blood And Tears starring Angel Aviles (Mi Vida Loca, Desperado). Those films along with their highly successful soundtracks, elevated the Darkroom Familia to the top of the Latino Rap genre. They have been featured in Lowrider Magazine, The Source, Rap Pages and more, including being the first Northern Cali Latino rappers to grace the cover of a worldwide rap magazine on Murder Dog.