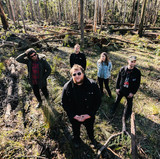 The Smith Street Band have announced their return to live music in 2021, with a series of full band, stripped back, semi acoustic, seated shows in Victoria and New South Wales.   As soon as Covid-19 restrictions were eased in Victoria The Smith Street Band got to work rehearsing and re-writing a set of their songs to suit a seated Covid safe show and in February and March the band will take the shows to The Forum in Melbourne, The Enmore in Sydney as well as a handful of regional Victorian shows.   The shows coincide with the release of Unplugged in Wombat State Forest - 10 Smithies tracks reworked and recorded live at the band's Bush House Studio, available both as a new record and streamed performance. With the full album now available to preorder the first track from the release, ‘It’s OK’, is out now on Pool House Records.   While only playing nine shows in 2020, The Smith Street Band kept busy releasing three albums. In April they landed their first #1 on the ARIA Album chart with their fifth studio album Don’t Waste Your Anger. During the year they also released two digital only live albums, Live At The Triffid and Viva La Revwhich charted at #4 and #30 respectively. Frontman Wil Wagner also released Spiralling - his first solo album in eight years and his first top 10 solo recording, charting at #8 on the ARIA Album charts.