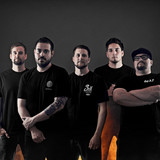 Mindcollision – that’s concentrated Rapcore power out of Switzerland! Mindcollision plays an energetic and djenty metal mix with rap influence and DJ-ing- and sampling elements. Thanks to the success of their album Urban Playground Mindcollision performed at the Impericon Festival 2016 in Oberhausen DE, where they played on the Mainstage together with Hatebreed, Emmure, Northlane and more. In June 2016 Mindcollision could replace the british metalcore band Architects at Greenfield Festival in Interlaken and performed in the evening on the Eiger Stage. Shortly afterwards, the band was on tour in Germany and Czech Republic. But Mindcollision is already active since 2002 and they were able to gather a lot of live experience on different stages in the Swiss music scene, whether as supporting act for Hacktivist and Skindred, various festivals, or at the Macbeth Joker Fest together with Breakdown of Sanity.