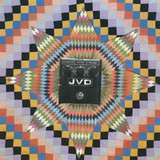 John Van Deusen creates aggressively honest, thematically rich power pop. His style is built on a strange foundation of influences, resulting in an indie rock sound that feels both familiar and curious. From his early career in The Lonely Forest (Trans/Atlantic Records) to his recent outings as a solo recording artist, intimacy and vulnerability have been hallmarks of his songwriting. Consider his work as a little note that says, "It's okay to not be okay." John Van Deusen released (I Am) Origami Pt. 3 - A Catacomb Hymn on July 19 through Tooth & Nail Records and DevilDuck Records (EU/CA). For this album and its forthcoming sequel, Van Deusen teamed with producer and friend Andy D. Park (Pedro the Lion, Deep Sea Diver). John Van Deusen currently lives in Anacortes, Washington, with his wife and cat, and helps run a board game store. He also yells and plays bass in the hardcore punk band BUFFET.