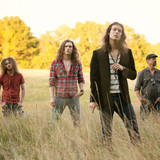 Red Sky Mary has been relentless in the quest to establish itself as a musical powerhouse. Their brand of rock ‘n’ roll combines early 70’s high voltage swagger with brutish modern-day anthems. They are all about cutting loose, throwing back a few drinks and living loud. Red Sky Mary unleashes their first full-length album, River Child [Carved Records]. Their hard hitting riffs cut with metallic edge, while each lyric reflects life experiences good and bad. The New England quartet—Sam Vlasich [vocals], Tom Boisse [guitar], Barrett Goeman [drums], and Gary Boisse [bass]—have formally landed, and they’ve brought the mayhem with them. In order to cut this big and ballsy ten-song collection, the boys retreated from their native Portsmouth, NH to the iconic Groovemaster Recording Studios in Chicago, IL. They teamed up with producer em_jay_dee [a.k.a. Matt Dougherty] and Grammy-nominated producer/mixer Johnny K [Nonpoint, Staind, Disturbed] to record what they describe as a huge step forward for the band. “We had a great experience working with Johnny K and Matt! Their experience and professionalism helped us create the best possible record,” states Tom Boisse. With a solid rock ‘n’ roll foundation; Red Sky Mary’s evolving musical style is formed by the diverse influences of its members. Tom continues, “With this record we managed to capture a well rounded representation of the band.

With River Child we wanted a bigger more in your face sounding record. I think we got it!”