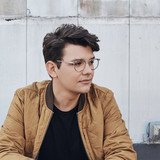 Flowery Branch, Georgia native Andrew Jannakos grew up in a small-town neighborhood where barbecue parties and backyard soccer games were everyday events. Today, that sense of community translates to his nearly one million followers across Facebook, Instagram, and TikTok. Since Jannakos first teased his breakout single, “Gone Too Soon,” in a viral clip now viewed over ten million times, that community is only getting stronger. Many of Jannakos’ initial followers knew him for his illustrious run on season 16 of NBC’s The Voice, but it wasn’t until a year later, in July 2020, that his then-girlfriend (now wife) posted a video of him cooking dinner while singing along to “Gone Too Soon” to his TikTok and took his social stardom to new heights. The video racked up 250K likes by the next morning, earning him over 750K followers on the platform to date. When Jannakos finally released “Gone Too Soon” (which he co-wrote with Jason Afable and Josh Bricker) in September, the song garnered over 15 million streams in just over a month, entered Billboard’s Hot 100 chart and helped land Jannakos at No. 1 on Billboard’s Emerging Artists list. With one of the best-performing indie country releases of the year, Jannakos is proving to be one of the genre’s premiere ambassadors, bringing it to new audiences on social and streaming platforms.