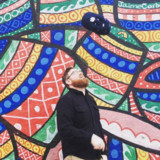 Semi-tropical instrumental sample-based project Havana Swim Club emerged during the Covid shutdown after the birth of producer/creator Dan Koch’s first child. At the time, Koch was also pursuing a doctorate in counseling psychology. In quarantine with a new baby at home, Koch sought out summery, escapist music and began experimenting with samples in that vein. He was drawn to a variety of tropical genres spanning Jamaican Ska to Latin Jazz, as well as homegrown soul, disco, and funk. Retro world albums, along with the chill instrumental music Koch sought out while studying, opened a world of global genres and vintage sounds. He began playing around, crate-digging for inspiring samples and adding his own vision. The result is a self-titled first album that dropped June 11, 2021.