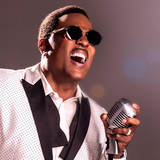 Charlie Wilson is an R&B icon whose vocal prowess began as a founding member & lead singer of The Gap Band (“You Dropped the Bomb on Me,” “Outstanding,” “Party Train,” & “Burn Rubber on Me”.) As a solo artist, Wilson, has 11 #1 singles, 13 Grammy nominations, a New York Times & Washington Post best-selling memoir, “I Am Charlie Wilson” & a BET Lifetime Achievement Award. Fresh off the heels of his Bruno Mars collaborated #1 hit song, "Forever Valentine" Charlie Wilson delivers his next single, “One I Got” The song is another feel-good track just in time for the Summer about how no material item can compare to his lady love. Wilson’s 2017 album, In It To Win It, includes the single “Chills” which achieved #1 status on the Billboard Adult R&B Songs chart & the single “I'm Blessed” ft. T.I. garnering a #1 spot on the Billboard Hot Gospel Songs chart & was nominated for a 2018 Billboard Award for Top Gospel song. This marked the first time an artist has had two different #1 songs on these charts simultaneously. “Uncle Charlie,” the lovable nickname given by Snoop Dogg continues to be one of the most sought-after voices in music today.