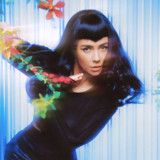 MARINA is an award-winning, platinum-selling artist. Revered since her breakthrough in 2009, she has released three UK Top 10 albums including Gold certified ‘The Family Jewels’ (2010) and ‘Electra Heart’ (2012) which debuted at Number 1 on the UK’s Official Charts. Marina’s last album, ‘FROOT’ (2015) was a Top 10 debut on the SoundScan/Billboard 200 and reached Number 4 on the Top Albums Chart. Released to widespread critical acclaim, the album reached #1 on the iTunes ‘Top Albums’ chart in the U.S., Argentina, Greece, Ireland and the UK and hit Number 2 in Canada, Australia, Brazil and multiple other countries. MARINA has accompanied each album release with global sell-out headline tours, with shows at prestigious venues and world-renowned festivals including Glastonbury, Coachella, Governors Ball and more. Her recent release LOVE + FEAR deals with these two sides of the human experience, taking inspiration from the psychiatrist

Elisabeth Kübler-Ross who argued that there are two primary emotions: fear and love.