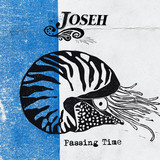 Joseh quit his job in a glossy advertising agency and since then has been doing alternative folk music with instruments and sounds you wouldn’t otherwise hear in an Indie-Folk genre. Orchestral arrangements often lead to a cultural clash. Joseh is a master of embedding various influences into the Alternative Indie-Folk-Genre. During his pandemic-break, which he calls himself „a lost weekend“, he took his emotional sweat and wrote and produced the EP „Passing Time“. Between Americana, Good ol’ Folk and Arabic influences he lets us know about the memories we share with old friends and that realistic optimism lasts a lifetime if one chooses it. The sound indulges in new sounds like a banjo while also being able to stand firm in his roots.