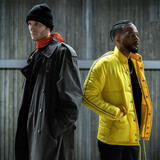 Hip hop artist James “Taz” Conley and producer Riley “Goon” Taylor are the electric new hip hop duo The Seige. After following different paths to the City of Angels, Taz and Goon found each other and started their initial collaboration. Their first 3-song project was released independently in 2015, Act I: WasteLAnd. It’s success proved the strength of their partnership, and they’ve gone on to release three additional EPs: Act II: Sinister, Act III: Atomic, and most recently Act IV: Awake. Their music resounds, characterized by energetic, drumming beats, and aggressive, pounding, and motivating vocals. The duo cites such musical influences as JAY Z, Linkin Park, Rage Against The Machine, J. Cole, Kendrick Lamar, and Eminem among a host of other rap, hip-hop, R&amp;B, alternative, and rock artists. A very diverse and eclectic personal playlist of artists can be heard in the creative tracks the duo has released. Taz vocalizes his frenetic lyrics to exciting arrangements pulling from hip hop to dance/pop to even some country highlights and other surprises. Merging the words SEIZE and SIEGE, The Seige hopes to grasp people’s attention and barrage them with a strong message of positivity that can help overcome negative thoughts and promote healthy perspectives on life. Ultimately, the duo is driven to create musical experiences that can motivate and inspire people to reach their fullest potential and not be constrained by the limits the world tries to impose.