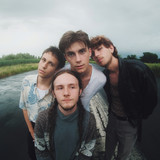 “Their songs are filled with pathos and feel” writes the Frankfurter Allgemeine Zeitung about the young band, made up of Lasse Kuhl, Sorin Della Monica and Marius Wunderlich. Since forming back in 2019 the multi-instrumentalists have sorrounded themselves with a bunch of other musicians who are contributing to forming their sound. The early folk-inspired singer/songwriter ballads have developed into more dreamy Indie-Pop tracks. These days, the two are often accompanied by the Wiesbaden based Celloduo - in the studio and on stage. Following up on an extensive and experimental songwriting phase during the first lockdown, sun’s sons have now produced their first EP with producer Sebastian Neumann. You & My Mind was released on May 15 on all major platforms. The original melodies stick in the head, while the distinctive melancholic lyrics touch the heart and truly make it a sun’s sons record.