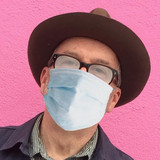 Richard Ford turned from a successful career as a professional bass player (Joe Jackson, Bill Nelson) to that of an Emmy winning music producer and music editor for feature films. Over the the past 20 years he’s worked with some of Hollywood’s great filmmakers on landmark films. But the itch to get the basses out of the closet and create some music of his own has persisted throughout. Basso Profondissimo is a personal, unashamedly self-indulgent project. Basso Profondissimo includes a 6 track EP and an album, Basso Profondissimo 2 (aka BP2). A collection of music, designed on bass, and (mostly) played on bass. Obatala and Orfafardo from BP2 have been featured on LA's KCRW and Orfafardo picked as KCRW's Todays Top Tune for May 19th 2021. More info at bassoprofondissimo.com “…as a belated personal statement after two decades of studio work it is warm, inviting and persuasive evidence of a composer/player who has that ability to turn sound into something more visceral and visual.” Elsewhere, NZ "Outstanding! Richard has great ideas. His Basso Profondissimo shows a keen feel for mood, and sharp awareness of nuance.” KPFK, Los Angeles Beto Arcos, Global Village "This rendition of 'Malibu' took the groove for a long ride in a fresh new vehicle and there's room for everyone.” WSUM/Greenarrow radio 'Weather Report bathed in a mojito' Allen Jacobs, Jacob’s Ladder music