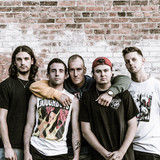 Paying homage to both the music style and stalwart conviction of their Syracuse predecessors such as Earth Crisis and Another Victim, Trail of Lies took the world of hardcore by storm with their “Strength Through Discipline” EP in 2016. With lyrics concerning perseverance, Trail of Lies embodies the true essence of the word discipline. They quickly drew the attention of the community with their energetic and heralded live show; making appearances on many high profile hardcore festivals such as This is Hardcore, United Blood, FYA, among others. They announced the release of their debut LP “W.A.R.” scheduled to premiere on Edgewood Records in 2018. “W.A.R.” is expected to take the already unstoppable power-house that is Trail of Lies, to a level that will cement them as contemporary legends that will be spoken about for decades to come. ~ Ace Stallings