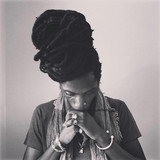 Le Prince was born Gino Doorson in Amsterdam, Netherlands on May 4th, 1986. Gino grew up in Amsterdam Zuidoost and was raised by his aunt. He grew up in a musical family listening to jazz, classical music, hiphop, reggae and other genres of music. In his early childhood, he was heavily influenced by traditional Surinamese music and sang in a Kawina, Kaseko Group. He loved making music and he would use the facilities of the local community centre and in youth programmes to make this traditional music. When Gino saw Michael Jackson perform on stage, he made a conscious decision that he wanted to become an artist himself. After many years of practicing, his first major performance was at the Caribbean Kwaku Festival in Amsterdam performing his own Surinamese music. In his teenage years life was tough for the upcoming artist and the tables turned for a life changing experience. After having faced the hard reality of the streets, Gino decided to begin to change his life for the better.

“LePrince” was born. He started songwriting and singing Reggae music to promote the principles and ways of life that he received from the teachings of his Majesty Selassi. He did so with his band Liberty Sound. They toured throughout the Netherlands performing Reggae Music in 2008 and 2009. Shortly after starting the band however, Le Prince left so that he could focus on developing a solo career. Le Prince created his own style combining reggae with R&B yet urban ska flavour. He was influenced by the greats of Bob Marley, Peter Tosh, Jacob Miller, Israleites, Toots and the Maytals, Dennis Brown, Shabba Ranks, Buju Banton, Sizzla, and Turbulence. These artists and his earlier musical influences helped him to create his own style combining reggae with an R&B yet urban ska flavour. His first song that garnered large recognition was Vergeef Me. In 2008, Le Prince placed second in the Amsterdam City Games Competition and in 2010 he won first place in an HIV Campaign raising awareness about the virus amongst youth. He toured the Netherlands singing and speaking about the devastating impact that the epidemic has in parts of the world. That same year he also won the Best R.O.C. artist for R.O.C. Central Netherlands – the Netherlands Pop Academy. In 2013 he graduated from the Pop Academy. In 2015 LePrince signed a contract deal with International Producer Boaz van de Beatz. Since then he did a number of featurings with Dyro and Boaz vd Beatz and other Dance deejays. LePrince regularly performs with Boaz vd Beatz live on stage at Defqon (Netherlands), Summer Festival (Antwerp), Mysteryland and Redbul Culture Clash (Ahoy, Rotterdam). He also performed at Zwarte Cross (Netherlands) and Sziget (Budapest). LePrince is ever and always busy finetuning and augmenting his craft and expresses that “Music is All About Life and My Life Is All About Music.” He wants to inspire people with his music and shows that you can be and create something out of nothing. “One should always continue to see the positive things in life and believe in oneself”. Le Prince has shared the stage with great artists like Elephant Man, Beenie Man, Richie Spice, Coco Tea, Natural Black, Ziggi Recado, Jah Cure, Tarrus Riley, Dean Fraser, Midnite, Fantan Mojah and Turbulence. With a number of the above he performed in a sold out Heineken Music Hall at the Amsterdam Reggae Festival. He toured overseas in concert with Richie Spice and Lutan Fyah. He also served as a Master of Ceremony for concerts featuring Sizzla, Ska Legend, Toots and The Maytals, Gyptian, Fantan Mojah, I Wayne, Bushman, Jah Cure, Beres Hammond, Midnite, Tarrus Riley, Dean Fraser, Gramps & Peetah Morgan (Morgan Family). LePrince’s performances live on stage are with high voltage energy and a show to watch. .