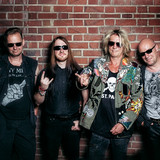 The fact that Hamburg is not only the "most beautiful city in the world" but also the capital of Powermetal has been well known since the late eighties of the last millennium. It should also be familiar to any friend of melodic, heavy sounds that IRON SAVIOR, the band around Mastermind Piet Sielck, belongs to the the Hanseatic Metal Circus like the Reeperbahn to the Kiez. Founded as a solo project in 1996, by multitalent Sielck, who has established his reputation not only as a guitarist but also as a producer. Over the years the quartet has gained more and more full character of a band. Continuously and relentless they released ten studio albums, one live CD / DVD, and chart entries among others with “Titancraft” (2016) and “Kill Or Get Killed“ (2019) and more than 9.000.000 times streamed anthem "Heavy Metal Never Dies" is indicative for that the Hamburg based band is on the right track with their classic, infectious Heavy Metal sound.