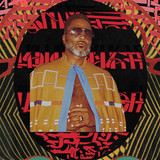 Shabazz Palaces’ Black Up was recently hailed as one of the best albums of the decade by outlets like Pitchfork, Gorilla Vs Bear, and Variety. Pitchfork summed it up thusly: “Black Up is drowned in murky instrumentals and bombastic, introspective rhymes. The sounds flirt with jazz but also root themselves in a firm understanding of silence, or the sparse magic of simplicity. The songs teem with unexpected climaxes...From great mystery exploded an album of impossible vision.” That “impossible vision” has continued to confound and engage Shabazz Palaces fans over the course of four acclaimed albums and two EPs. Each release feels like an evolution, letting the music speak for itself, while slowly revealing more about its creator.

With The Don of Diamond Dreams, that spirit remains, this time embracing modernism in hip-hop and rap. The album features the highlights “Fast Learner (ft. Purple Tape Nate),” “Chocolate Souffle,” “Bad Bitch Walking (ft. Stas THEE Boss), and “Thanking The Girls.” It also features contributions from singer/keyboardist Darrius Willrich, Seattle’s OCnotes (who collaborated with Ishmael Butler on the Knife Knights project), Los Angeles musician Carlos Overall, and bassist Evan Flory-Barnes. The Don of Diamond Dreams was produced by Shabazz Palaces at Protect and Exalt: A Black Space in Seattle, mixed and engineered by Erik Blood at Studio 4 Labs in Venice, California, and mastered by Scott Sedillo at Bernie Grundman Mastering in Los Angeles.