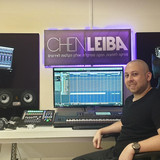 Chen Leiba, 33, currently produces music and works as a DJ at Clubs and Weddings. His career began at the age of 12 when he started to create his own music. At the age of 16 Chen started to record music he produced at parties and received quite a large exposure. Now, Chen produces Original Music [Pop/Tropical/House] for many singers in Israel and has won special collaborations with a number of well-known artists. Chen wanted to do something different from the mainstream music. His biggest dream is to produce his own music that could be heard all over the world. His music is currently played in every music platforms and several international radio Stations.