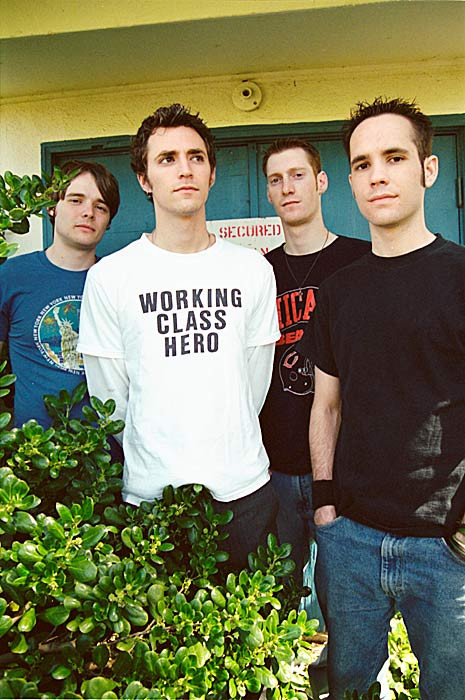 Chicago punk-pop combo Allister was formed in 1995 by vocalist/drummer Tim Rogner and guitarist Johnny Hamada, longtime classmates who first teamed in a cover band organized to play their school talent show. The duo expanded to a trio the following year after Hamada met bassist Eric "Skippy" Mueller at the University of Illinois, and in early 1997 the group played their first live date under their original name, Phineas Gage. They eventually rechristened themselves Allister after a character on the children's program You Can't Do That on Television; accordingly, the band's 1998 Drive-Thru label debut 7" was entitled You Can't Do That on Vinyl. In mid-1998, Mueller assumed second guitar duties following the addition of bassist Scott Murphy. The full-length Dead Ends and Girlfriends followed a year later from Drive-Thru, recorded for a mere $700. Allister's catchy songs and jokester attitude (album cover song choices included the Fraggle Rock theme song) helped build the guys a pretty respectable following. Hamada and Mueller later made their exits, so Rogner not only moved over to guitar, but also added in his brother Chris to fill the vacancies. New drummer Dave Rossi further jumped into the Allister fray. Last Stop Suburbia arrived in 2002, and the album was supported on shows with acts like Less Than Jake, the Starting Line, and Sum 41. The record went on to sell over 80,000 copies. Lineup changes followed post-Suburbia; ex-Showoff guitarist Kyle Lewis joined in place of a departed Chris, and Mike Leverence stepped up to the drumkit. Writing for Allister's next album began in 2003, but was drawn-out due to the band's constant touring. The quartet eventually returned in the fall of 2005 with their third Drive-Thru full-length, the slightly darker Before the Blackout. Following more rounds of touring, including a fall 2006 trip to Japan, Allister announced in March 2007 that they would be going on an indefinite hiatus, so Rogner could be home with his growing family. Lewis and Murphy went on to form the Get Go. ~ Jason Ankeny, Rovi