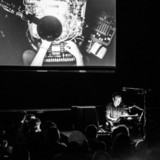 Jan Jelinek is a musician, producer and remixer. His works deal with the transformation of sounds, translating source materials from popular music into abstract, reduced textures. Bypassing traditional musical instruments, he constructs collages using tiny sound fragments from a wide variety of recording devices: tape recorders, digital samplers, media players and the like. The recordings are processed into repetitive loops that boil the original down to its essentials, the source material becoming indecipherable in most cases. He began releasing his work in 1998, initially under the pseudonyms Farben and Gramm. Over the following years, he worked with artists like Sarah Morris and the German writer Thomas Meinecke, collaborated with the Japanese improvisation ensemble Computer Soup and the jazz trio Triosk, and created audio-visual performances with video artist Karl Kliem. In 2007, with Andrew Pekler and Hanno Leichtmann, he founded the improvisation trio Groupshow that refuses any repertoire and any limitation on performance duration. In 2008, Jelinek established the faitiche label as a platform for his own experiments, for joint projects, and for work by musician friends. The sixteen releases to date include a collaboration with the vibraphonist Masayoshi Fujita and the work of sound researcher Ursula Bogner. Since 2012, Jelinek has been writing and producing experimental radio pieces for state broadcaster SWR that deal with fictional identities and soundscapes.