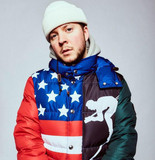 JNS is an artist and producer situated in Oslo, Norway. His single release “Kan ikke si nei” marked JNS’ fifth radio listing on NRK P3 within the past 3 years. JNS is also a go-to-producer in the urban/pop scene, producing for artists such as Tayla Parx, Unge Ferrari, Jesper Jenset, Kamelen and Lars Vaular to name a few. JNS is set to release a brand new album in 2019, featuring some of the most exciting rappers/artists from the Scandinavian urban scene.