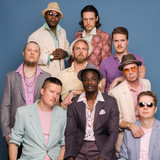 "Frozen Finland meets boiling Benin - Fela meets Weather Report" -Rick Sanders, fRoots It all started in the spring of 2013, when 3 guys from Finland headed down to Benin, West Africa, to study the local music culture, especially the rhythms of Voodoo. During a highly eventful period of 6 weeks, they hooked up with virtuoso singer/percussionist Noël Saïzonou, started a band and recorded an album. In 2019 the band has toured in 15 countries and released 4 albums. For more info, visit www.helsinkicotonouensemble.com