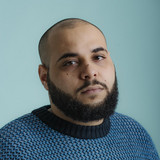 Marone was born on April 16, 1994 in Genk, Belgium., his is father is Egyptian and his mother is Moroccan. When Marone was 3 years old, his parents moved to the Netherlands and he grew up in Maastricht. He stayed there until he turned eighteen and went to study at the Rock Academy in Tilburg. He fell in love with the city of Tilburg and has lived there for 8 years now. In 2013 he participated in BNN's The Next MC. In 2016, Marone released two singles called Gang and Niet Bellen, ahead of his EP Korte Zomers, Lange Winters, which was released towards the end of the same year. The Ep was well received and streamed more than half a million times, and Marone also reached the final of the ‘grote prijs’ in the Netherlands. In April 2018, the mixtape L.I.E.Z. (Lacken Is A Disease) along with a short film. He also contributed to the rapper Snelle single ‘All eyes’ for his Ep ‘Lieve jongens’. The record has reached more than two million streams. He won the final of the FunX Talent Vibes at the end of 2018. Less than a month later, Marone released his new single Spotlight, in collaboration with rappers Mennoboomin & SXTEEN. Marone closed that year with an EP called Vibes. This Ep currently has a million streams. Marone has built up a strong name within the urban scene, regionally and nationally. He works as a producer, which makes him a unique artist who not only writes and records lyrics but also writes the music. Marone has more than 10 million streams to his name.