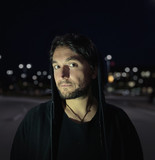 Featuring Are You Real?

From the open-hearted lo-fi songwriting of the beginnings to the recent electronic productions, Are You Real's music has always been the most intimate exploration of an invisible world. Behind the weird moniker is Andrea, singer-songwriter and producer from Venice, Italy.  His debut album “Songs Of Innocence” was recorded with a band and followed by a small European tour. In the second album, Songs From My Imaginary Youth, Andrea gets more personal, playing every instrument and self-producing the record.  From 2018 Andrea has founded the record label Beautiful Losers, working as a producer for other artists, like An Early Bird, About Blank, Mått Mūn, A Red Idea.  He’s actually recording his third album, which will be electronic.