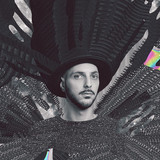 Chilean alternative singer/songwriter Aviar, begins his journey in music at age 6. Starting at piano, then evolving into violin and ending up with his guitar, Andrés Vilensky, born in Santiago, Chile, intertwined with his countertenor voice, achieved the means that would later on be manifested on his music. From influences fluctuating from pop artists such as Michael Jackson to numetal bands like Korn, Andrés would finally set in a mid-00’s melancholy sound that relates to Placebo, Silverchair, Incubus or Staind but with a more clingy twist. This sound would help him achieve international recognition with his band “Sofia”, with whom he obtained the first grand prize between 1.000 bands in the Slicethepie.com competition (UK, 2009) and later being selected as the nº1 band in the ourstage.com contest (USA, 2010), letting him work with renowned chilean producers such as Gonzalo González (Los Prisioneros, Los Bunkers, Francisca Valenzuela) and Mariano Pavez (Bbes Paranóicos, Lucybell, Gonzalo Yáñez).  After a hiccup in his solo career to form his company, Aviar returns to the stage this 2018 with the release of a new EP composed entirely in spanish, unlike his previous works. In the hands of producers Pablo Stipicic and Camilo Artigas, "Imaginé EP" mixes some of his influences of alternative rock with an updated synth pop that evokes sounds from Arcade Fire to Twenty One Pilots, including a very intime and powerful ballad about his father’s death in 2010 entitled "Funeral".