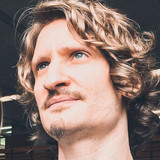 Since his first steps in Buenos Aires, Franco Bianco has been related to music and since then, he has polished a personal sound. Though he is an electronic musician orientated to the dance floor, his work covers from ambient, to techno merged with folk, country and tango. That's why he has been mentioned as “the Danny Boyle of electronic music” by some European media. His music took him on worldwide tours (from Australia to Lebanon, through Japan, USA and Egypt), with more than 300 presentations in 27 different countries during the last years. Every year, he extensively tours Europe, as well as South and Central America. In Argentina he is also regularly booked at some of the most important megafestivals, such as Telecom Personal Fest (2004) as well as the last editions of Creamfields Buenos Aires (2008, 2009, 2010 and 2013). Talking about European festivals, in 2010, he played at the well-known Circle of Love Festival, and in 2011, he played on the 1st of May at the Görlitzer Park in Berlin as a headliner, in front of more than 7k people. From 2007 to 2016, he participated every year at the Midsommar Festival and Secret Island Nation Festival (Switzerland and Sweden respectively) and also at “Fête de la Musique” in Geneva (Switzerland), as a headliner in front of more than 5k people on the main stage. [Continue reading at francobianco.com]