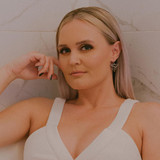 Brit Daniels intertwines energetic pop with vibrant elements of EDM to create a sound that completely encompasses everything about her. Born and raised just outside of Dallas, TX, her talent was solidified at the ripe age of two when her mother caught her singing Twinkle Twinkle Little Star in their backyard. Daniels really began honing her craft &amp; truly understanding herself as an artist when she began recording in local studios, performing in various talent shows &amp; competitions &amp; singing the National Anthem for several major league sporting events. Splitting her time between Nashville &amp; Los Angeles, Daniels has worked on projects with different producers, writers, engineers, etc. who have also worked with The Chainsmokers, Kanye West, Niall Horan, Troye Sivan, 30 Seconds to Mars, Evanescence, Jay Sean, Big Time Rush, F.U.N., Macklemore &amp; Ryan Lewis, Cassadee Pope. Music has always been the constant in Daniels’ life. From her mother putting headphones on her belly while pregnant with Daniels to her first instrument given to her by her father, she knew becoming a musician was her fate. However, before Daniels moved to Nashville, the unexpected happened, &amp; her father passed away. Through this experience, Daniels started refining who she was an artist &amp; the stories she wanted to tell. In her father’s death, Daniels found her strength &amp; her passion ignited. Thriving on an outgoing &amp; bubbly personality, she’s not afraid to dig deep &amp; delve into anything that life throws her way.