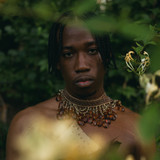 Born & raised in Queens, NY & currently based in Brooklyn, Akinyemi is a Nigerian-American independent artist who is extremely versatile & often creates music that blurs genre lines. On his debut project, REBORN, he showcases an intimate offering of the human experience in 12 songs. Pairing many of these records with visuals, he makes it known that filmmaking is a huge part of his artistry. Akinyemi is a multi-disciplinary artist who instead of looking for excuses, figured out all the aspects of his creative process in-house. He’s consistently in a state of learning, reading books to expand his proficiency, & taking classes to gather everything he can about the visual aspect of music videos & films. He often works with his girlfriend Kayli Weiss, a director/ DP, writing treatments, planning shot lists, renting gear & developing a creative language that is completely his own. The absence of delegation allows him to consistently elevate on each visual offering he delivers. Akinyemi has received praise from Vice, NPR, Complex, Ones To Watch, Lyrical Lemonade, Highsnobiety, Wonderland, Huffington Post & many more. His songs premiered on The Ebro Show on Apple Beats1 & he graced the cover of TIDAL’s Rising playlist. His music was featured on Spotify’s Fresh Finds, Alternative Hip-Hop & Spilled Ink playlists; Apple Music’s The New New York, Chill Rap playlists; & Gary Vee’s Monday to Monday playlist.