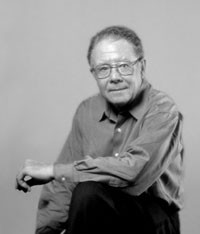 American Midwest-born composer Easley Blackwood achieved international attention through his work in microtonality, but sustained his reputation through two periods of more conservative composition. His experiments in use of a 19-note, evenly tempered scale remain significant, even after his settling on a musical language that pre-dates the twentieth century. His four decades at the University of Chicago afforded him a base from which he was able to refine his structural ideas and train another generation of American composers. Blackwood also achieved acclaim as a pianist in both his own works and those of his contemporaries. Blackwood benefited from an especially rich period of training, beginning with studies under Olivier Messiaen, continuing with Paul Hindemith at Yale University where he earned his bachelor's and master's degrees, and, finally, as a Fulbright student from 1954 to 1957 with Nadia Boulanger in Paris. Well before he had completed his studies, Blackwood was experimenting with radical tonalities, arousing "consternation" among his instructors, as the composer recalled in 1993. Shortly after 1950, he turned to a more conservative trend, one lasting a decade, influenced by his work with Boulanger and the creative atmosphere in Paris of that time. His Symphony No. 1 was completed in December 1955, a time during which Blackwood was, in addition to being an advanced student, a performing pianist, accompanying numerous singers on European tours. The 1960s and 1970s brought a shift to, as the composer himself put it, "a more radical modernism." After 1980, however, his musical language evolved to a more conservative, "even reactionary," style. In the 1990s, Blackwood explained that he then felt comfortable in a broad variety of styles, while doubting that his further evolution would be any more consistent than it had been in the past. Stimulated by commissions from the Library of Congress and the Chicago Symphony Orchestra and recognized by awards from the Koussevitsky Foundation and Brandeis University, Blackwood has amassed a sizeable body of work. Grants, too, furthered his work in microtonal composition; few others have contributed so much to this area. Çedille Records has documented much of his work, both as composer and pianist, with, among others, recordings of his First and Fifth symphonies, chamber works, and recitals of his own piano works and those of Ives, Casella, and Szymanowski.