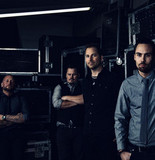 Andy and the rockets

Featuring Andy and the rockets

Andy and the Rockets is a Swedish Rock’n’Roll band whose sound combine modern rock and classic rockabilly. Inspired by legendary artists such as Elvis Presley and Johnny Cash, with influences from bands like Mötley Crüe and Airbourne. This mashup ends up in a modern and exciting Rockshow signed Andy and the Rockets! The band was founded in 2012 after Andreas Forslund met Swedish producer Fronda. Music was in the making and when Forslund came in contact with Filip Westgärds, and the band was born. A few months later the former Metal drummer Max Marcusson joined the band, together with Robin Lagerqvist on lead guitar, with multiple US Tours in the bag. The first Single Shy Girl (2013) was played daily major Swedish radio stations and the success was a fact. The band started touring all over Sweden and later the same year the EP Magnify the Small was released. Robin left the band due to personal reasons and a new guitarist, Anton Britz, joined Andy and the Rockets. The band kept on touring and simultaneously worked on their first full length album Big City Lights, produced by Martin Engström together with The Rockets. The album was released in mid 2017, and the single Come a little Closer was well received by both radio, charts and fans, and this time world wide. In the beginning of 2020 Robin reunited with Andy and the Rockets and after a few months in the studio the band now sounds better then ever! New music is made and the Rockets can’t wait to show it to the world!