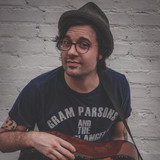 Playing whimsically melancholic roots music with a stage name taken from Weird Tales Magazine, Horace Holloway is the musical alias of Tallahassee, Florida based singer/songwriter Jeffery Errol Morrison. Growing up in poverty, it wasn't until his early 20's that the possibility of playing music would present itself, with Morrison drawing inspiration from the hard working touring bands whose members he had befriended, including Okkervil River and Margot & The Nuclear So And So's, as well as the sounds of his childhood; Top 40 alternative favorites like The Wallflowers, Counting Crows and Gin Blossoms and classic country songs. 2019 saw the release of his Dirtleg Records debut, the "Tin Foil Stars" EP. Produced by Joe Rodriguez (A Flock Of Seagulls), "Tin Foil Stars"