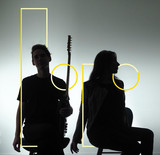 After meeting at Jazz School and refining their sound through several releases and a stint living in Canada, The Response craft alternative pop songs that are both introspective and energetic. The Christchurch native band perform as a duo, combining a variety of live electronic instruments with guitar and vocals resulting in a familiar yet entirely unique sound which has seen them share the stage with such international acts as Baio (of Vampire Weekend fame), Deep Sea Diver (Seattle), Big Scary (Australia) and Kate Boy (Sweden). The Response blend electronic minimalism, pop sensibilities and the eclectic influences of vocalist/guitarist Andy Knopp and multi-instrumentalist Victoria Knopp to create "indie pop at its carefully crafted best" (NZ Musician Magazine). After two years based in Vancouver, Canada where apartment living and public transit inspired a more minimalistic and increasingly electronic shift in their sound and live set up, The Response made their way back to New Zealand where they have since released singles Hollow Branches, 40000 Day and Night, Only In The Night and Practical, as well as two EPs and album Escaping This Cold Rotation. Described as “indie-proper”, the duo write, produce, record, mix and master all their own music. Their music is said to "offer a sense of cautious hope, one that brings nostalgic touches of loss, belonging and identity" (Permanent Rain Press). The Response also produce Imperial April, Volts, Music with Michal, and others