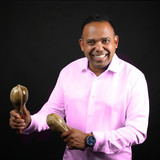 Daniel Peña is a Dominican producer and percussionist who began his musical career at a young age. During the course of his career he has had the opportunity to record with countless renowned singers and musicians such as: Ismael Miranda, Richie Ray and Bobby Cruz, José Alberto “El Canario”, Paquito Guzmán, Tito Allen, Larry Harlow, Nicky Marrero, Oscar Hernández, Willy Rosario among others. In 2014 he released his first album "Eleven" and in 2017 "Sancocho".

His most recent single Hijo del Cañaveral collaboration with Ismael Miranda & José Alberto “El Canario” was released on September 25, 2020. May 28, 2021 released his most recent album "Traigo Melao" (Remastered Limited Edition). A musical intellectual not only in percussion but also in musical production, are qualities that are noted in each album and musical note he plays and produces. Daniel is a member of the “Latin Recording Academy” and of the “The American Society of Composers, Authors and Publishers”. He is an American Grammy winner and is part of the Remo family featuring his custom congas courtesy of Remo. He is also endorsed by Vic Firth, Soultone Cymbals, and Jorg Gray.