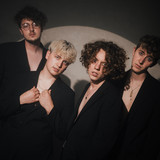 Back with their fourth single ´Where I wanna be found` - NEEVE don´t hesitate to offer another uplifting yet fierce track for their eagerly awaiting listeners. An alt-indie pop song written all about the confidence to part away from your doubts and insecurities towards your own purpose. The perfect soundtrack that makes you wanna get loose and walk right into the spotlight. The song describes the one thing in life that keeps you going when everyday stress hits you - a place to be self assured, that´s WHERE I WANNA BE FOUND. Armed with their energetic and distinctive pop sound, it's fair to say that NEEVE stands out from the pack. Made up of brothers; Felix & Axel, alongside Marius and Philipp, the German indie-pop group have collated a catalogue of songs that truly sets them apart from the rest. Hailing from the south side of Germany, NEEVE formed in 2018 after the group had been playing and touring under a different name. Inspired by their individual musical development, they chose to break new ground and head in a new direction. 'FALLING FOR YOU' offers silky pop moments laced with 80's nostalgia - and has almost 100K streams on Spotify alone. Forever drawing their lyrical content from real experiences, their most recent EP; entitled `Black and Blue`, featured a title track which tackles Felix' personal experiences with ADHD.