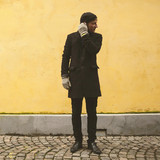 In 2012, I chose to put everything aside to fulfill my lifelong dream of writing songs for an album. At this point in time I also had an urge to get away from Sweden and see something new. After a lot of thinking I chose to combine my two biggest desires. I wanted to write songs while traveling the world.   I bought a ticket to Los Angeles, took my guitar and recording equipment in my backpack, and set off on a journey through North and South America that ended up lasting almost two years. I hitchhiked, worked on ecological farms and busked on the streets to live as cheap as possible. The experiences were fantastic but most important of all I wrote a lot of music.   Back home in Sweden I recorded the songs, and a group of friends and musicians added their instruments and magic to the album.   2004-2010 I played guitar in the Swedish indie pop band Billie The Vision & The Dancers